With the luxury of a month in Rome, it seemed that a day or two out of the city might be a good idea.  So we scanned the 200 Day Trips App, and chose Orvieto.  We then heard from a friend that he and his wife had loved this place, so figured we were on the right track.  The fact it was only about a €7.50 one-hour train ride from Rome was a real advantage.

The major effort was in fact getting up early (yawn), getting to the train station, and finding the train itself (at the far reaches of the station, considerably adding to our km tally for the day).  Orvieto itself was a breeze.  It is an old town, perched on the top of a rocky hill, reached by a funicular (or for those of you who are in Wellington, a cable car similar to ours).  We got there early, thankfully, because it meant that for just a few blissful minutes, we were free of tour bus groups.

The town itself was charming – one of those old, Umbrian/Tuscan hill towns built out of stone centuries ago, with window boxes and winding streets, and a lovely tree-lined street heading into the town.  These are the towns you think of when you think of Italy.  I know the travel-writing rules state you should never use the word “charming” but I have to in this case.  Because I feel a little in love with Orvieto, and it took me back to our first Italian trip 15 years ago, when we explored Spoleto, Assisi, San Gimigniano and Volterra, to name just our favourites.

Orvieto was cooler than Rome by several degrees – blissfully so in fact.  It made sightseeing easy, and as we had decided we weren’t going to rush around seeing all the sights, we felt very relaxed.  The cathedral is the key attraction, dominating its large piazza, but entrancing because of its decoration –mosaics, and some gruesome figures outside, and stunning Signorelli frescoes of the Apocalypse in the chapel (where unfortunately we were not supposed to photograph anything).

We broke our rule about tourist traps, and decided to have lunch in the square looking onto the cathedral, but at a wine bar rather than café.  So the fare was rather plain, but the wine was in fact very enjoyable.  Orvieto is known for its white wines, and we ordered a “superiore” wine from their list of Orvieto Classico wines (on the advice of the waitress).  So if I sound surprised that the wine was good, it is because I was, previously having had a rather poor relationship with Italian white wines (the occasional Vermentino excepted).

We couldn’t muster enthusiasm over a museum, and whilst we were somewhat attracted to exploration of the caves the timing of the tours wasn’t ideal, so instead we simply explored the streets of the town.  And in doing so, we found some places and views that reminded me just how beautiful Italy can be.

Feel like taking a stroll through Orvieto?  Only sorry I can’t provide you with the “limone” gelato.  It was to die for.

We are, quite simply too tall for Italy. We have to dip our heads going up and down the stairs to our bedroom and bathroom. Clearance is less than 1.7 metres! (Until you get to the top of the stairs, when clearance is even lower jutting out over half the stairway.) Likewise, the staircase to the laundry has an even lower clearance. It’s hazardous negotiating the stairs at night, holding the laundry, trying to turn off the light, and remembering to duck. Once I forgot. Did I mention the stairs are concrete? Ouch.

Our apartment is described in airbnb as a torretta – the tower bit is actually the laundry, shared with two other apartments. But our bedroom is still in the roof-line  and it slopes down to the sides, quite low, with beams, even lower. I can sit up safely on the bed, but can’t stand straight up. Of course, the first day we hit our heads several times. Then I had a week or two free, then bashed my head on the beam the other day. I am being extra-cautious now. And I have to admit to a few close shaves too.

However, I don’t want to complain, because our next stop may be even worse.

Well, we’re in Rome, and it was Sunday, and it was the only Sunday in July we could do this, because our target was waltzing around Lampedusa and Brazil the rest of the month, and we thought why not, and walked the two kms to the metro, paid our 1 euro fifty, and rode the four stops necessary, getting out with hundreds of others, and together we followed the signs, and walked up the wide streets, spilling off the footpaths and onto the roads, and as we got closer, the crowds grew, the police presence became more noticeable, and baby-faced young men who have barely begun shaving watched us as we walked past the gates they were guarding, and their comical harlequin-style uniforms just cried out to be photographed, but we couldn’t linger, as we were on a mission, and so walked on, with the crowds, the tourists, the locals – because they were curious too –  the couples on vacation, the noisy teenagers on a summer break, the families trying to keep track of all the off-spring, and the large groups getting in everyone’s way, a myriad languages swirling about us, until we finally made it to our destination, only to find that about ten thousand people (or maybe more – who can count that far?) had got there before us, and as we were finding a place to stand, the crowd gasped and cheered, and we hurried to get to a good viewing spot, where we could see him, but then realised that we found the crowd just as interesting as whatever it was he was saying (though at the end he departed from his ritual script and spoke simply, clearly, in Italian – which is after all his second language too – and I was proud that I could understand much of what he was saying, or at least the gist of it anyway), and the crowd cheered and crossed themselves, and we took photos, and here they are. 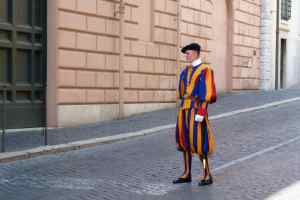 A crowd waits in anticipation, in front of St Peter’s Basilica 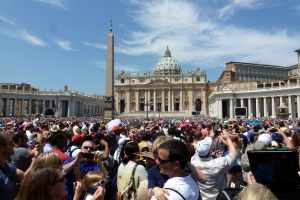 Who/what are they taking so many photos of? 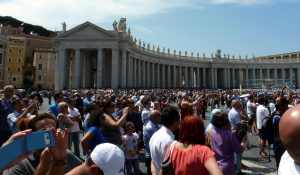 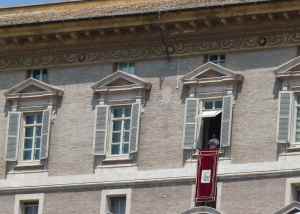 A window opened, and the crowd gasped 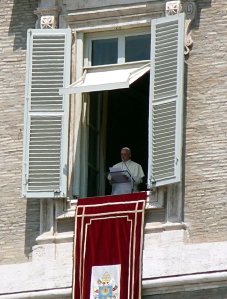 And he spoke to the masses

“We’re going to spend July in Rome,” we casually told friends and family before we left. We didn’t really think about what we might want to do, but that was okay, we had a whole month. That was plenty of time. We’d be able to get to know people in our neighbourhood, become locals at local restaurants, and feel at home. We could go off and explore new neighbourhoods, as well as touch base with all major must-see sights again. The possibilities seemed endless.

But so is Rome. No sooner had we got here, than we realised that the timer was running down. The truth is that Rome is bottomless. There are of course the major sights – the Vatican, the Colosseum and Forum, the Pantheon, and Trevi Fountain. There are dozens of museums (or so it seems), and more churches and cathedrals than you can imagine. Then there are the neighbourhoods – our own Primavalle, Trastevere, Testaccio, and others. The markets, the shops, the parks, the restaurants. We want to spend time in all of them.

So, there is a lot to do in Rome. But in Rome, we are also in the centre of Italy, and that makes it very easy to get to other places. Why not?  Just for a day?  We downloaded an App – 200 Day Trips from Rome. Mamma Mia!

So we’ve had to be very selective about how to spend our time, at the same time recognising that

a) the heat is exhausting and so we can only spend so much time outside before we will melt away and slither down a drain (or my toes will fall off – a story you do not want to hear),
b) we actually want to relax and enjoy ourselves, without feeling that ridiculous tourist pressure to see everything, and
c) we’ve still got a long time to go on this trip, and we need to pace ourselves.

So we’re learning to pick and choose, learning to cull certain sights, to make sure our tourist euro is well spent. But it doesn’t happen without a little regret.  And still, time is ticking on …

And this is what we learned at Food School (aka Eating Italy Food Tours):

And that’s what we learned in Food School.

Here’s what we ate in Food School: 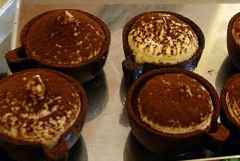 Tiramisu for breakfast? Why not? 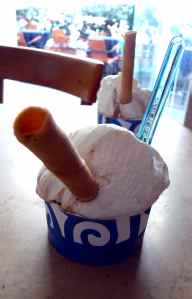 Gelato – and in Rome, by law, the whipped cream is free

The company also runs an evening tour of Trastevere, with wine tasting, which sounds appealing.  We’re thinking we might have to do that.  But we’re running out of time!

This morning, walking down Via Pineta Sacchetti to do some shopping, there was the usual noise. Lots of tiny cars, being driven very fast. Though unusually, no sirens this morning. And of course, lots of Vespas.

It is amazing how much life can be conducted while riding on a Vespa:

So here we are, in our apartment in Rome. We’re not in a fancy area, or the famous and romantic (apparently, we have yet to visit) Trastevere, or very close to anything. We’re in Primavalle, an area that distinguishes itself by not having anything to distinguish itself with. But it is full of normal, Italian life, and that’s what we wanted.

The apartment is as expected small, but not outrageously so, and we have a decent-sized dining room/ kitchen, a separate living room, and in addition to our blissfully air-conditioned bedroom, there is a mezzanine bedroom that is useful for drying clothes when the rack in the laundry in the tower is full.

We’re in a small, three storey apartment building, in a street full of slightly large 4-5 storey apartment buildings, surrounded by many more streets full of 4-5 storey apartment buildings. Outside our door, about 100 yards up the road, you can find, in order of proximity, a bar (bar/café), a pizza place, two dentists, a bar/gelateria where locals sit with gelatos in the evening, the small piazza or square where the locals congregate, a women’s clothing store, a busy sports bar, hardware store, pharmacy, tobacconist/magazine shop, a pizza/deli place, a pasticceria (pastry shop), a deli with good cheeses and artisan pastas, and a supermarket, amongst a few others.

Across the busy road from the supermarket there is a park, full of pine trees and dry long grass, with a view of St Peter’s Dome in the distance. We keep meaning to head over in the evening, when the sun is at the right angle, and take some photos. We’ve never quite got there yet, despite walking past it every day on our way to and from the metro.