Hottest:   Aqaba, Jordan, where the temperature soared to 47 degrees.

Coldest:   Warsaw, Poland, where we woke to morning frosts.

Most annoying cultural habit:   Hogging the footpath (pavement) in Italy

Most pleasing custom:    The friendliness of Jordanians, and being welcomed as “locals” at restaurants in Italy.

Most disappointing place:    Rome in July. (Rome is fabulous, just not in July).

Worst meal:    Poland sausage encased in potato dough with a weak, watery white sauce and a few slices of mushroom.

Well, the weather was about to set in, winter was on the way, so we had no option but to fly south.  And after about 34 hours on the move and in the air, we arrived home safely.  Now of course we’re enduring the process of our bodies adjusting to a time zone that is 12 hours out of kilter.  I read somewhere that your body adjusts by about one time zones per day.  So we’ve got several days before we feel back to normal.

I still have things to say, and photos to show.  So I’ll do a few round-up posts.  Bear with me, as they are likely to leap about in no logical order.

This blog name and design now seems inappropriate, given the temperatures and gloom we’re in now. But the principle behind it still stands, and I’m going to see it through.

Three months in Italy saw us cover enough of the country, and we got out hours before we officially would have become over-stayers. A two hour flight saw us head north, into lands where autumn has well and truly arrived. Where autumn is equivalent to a cold Wellington winter. Where two people, after acclimatising to the heat of the Middle East and an Italian summer, shiver in their lightweight but easy-to-pack jackets, wear layer upon layer, and make plans to buy hats and scarves as soon as they can. Where nine degree highs are a sharp contrast to the 20 degree evenings that made at least one of us shiver back in beautiful Monopoli.

Here we are in the ancestral lands of The Husband, the land where at least one of his great grandparents decided to leave and take a chance on the other side of the world. Here we are, in a land where it is a little easier to blend in, until we open our mouths, that is. Here we are in a land to which I have only ever paid cursory attention, even given its role in two of the major world events of the 20th century (and that I studied in one of my majors). Here we are in a country that kicked off a revolution, and gave birth to a major religious leader.

Here we are in Poland. For a couple of weeks, at least.

We have long drooled over photos of the Swiss Alps, drooling in the manner that keen travellers do, when they see somewhere new, beautiful, interesting, quirky, or perhaps, just somewhere they’ve never been. About ten years ago we ventured into the Alps at Chamonix, for a quick look, but still there was a spot we had always wanted to go, a place where D, in particular, would sigh and say “I’ve always wanted to go there.”

And now, with an extended time away, and with relative proximity, we decided to escape the heat of the ancient tower and northern Italy, and head further inland, to a higher altitude, to lift up our eyes, and feel refreshed.

Less than three hours drive, with a stop for fuel (both of the diesel and caffeine variety) before leaving Italy, over the beautiful Simplon Pass with a pause at the top for lunch along with other travellers enjoying the summer, and soon we were at Tasch, Switzerland, the end of the road. The huge covered carpark at the station was easy to find, tickets even easier to buy, and soon we were on the train south. By now the valley had narrowed, the mountains steep on each side, the scenery beautiful, and we craned our heads to look up and out the windows. The trip wasn’t long though, but we arrived at the station, looking oddly familiar after an Amazing Race episode, and found our hotel’s electric taxi. But still we hadn’t seen it. Until the taxi turned a corner, narrowly avoiding taking out several tourists walking on the largely footpath-less streets, and there, in front of us, was the mountain we had come to see.

Better views though, were to be had from our hotel room balcony. We stayed two nights, enjoyed drinks out on the balcony each evening, serenaded by an alphorn player practising on the valley opposite our hotel, whilst we admired the view.  In the mornings we woke to a spectacular  sight, which we could see from our bed. We sighed in bliss.

A beer with a view

Serenaded by an alphorn

The view we had come to see 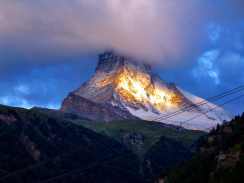 Morning light – view from our bed

So we headed off to Gornergrat, a high mountain plateau of sorts, with views of the Alps, and especially of the mountain. There were walks to do of varying intensities, so we chose an easy one, one that wouldn’t ruin my feet any worse than they already are, and saved a more energetic walk for later in the afternoon, back at Zermatt, when the temperatures were warmer, and the views just as lovely.
Our stay was of necessity a brief one. Switzerland is notoriously expensive, and shocked us after Italy’s more reasonable prices, and we still had plenty to see around the Italian lakes. But we could see how it would be pleasant to visit for several more days, and explore the trails around Zermatt, to some of the smaller villages, or – if we had the appropriate footwear – even up into the foothills. The trails were wide and well-used, and would have been easy for us to manage. Walking, with a capital W, was the reason many people were there. The resort village was teeming with Germanic and French families dressed for serious walking, every single member clutching at least one, sometimes two, walking sticks.

D off to climb some mountains

We could see too how awfully romantic the place would be in the ski season. Once again, I wished I was a skier – maybe sometime we’ll come back, just to experience it in winter, to enjoy hot chocolates and/or hot toddies in all those cosy bars with their roaring fires. This visit, though, was all about sitting outside and eating and watching the scenery, or the people who had, like us, come from all over the world to see the mountain. At times, both were equally interesting.

We decided to drive home from Italy via another pass, the Great St Bernard pass. At the top of this ancient pass, that has been used since the Bronze Age, that has a Roman road, and that Napoleon used to cross into Italy in 1800 with 40,000 men, is the St Bernard Hospice, home of the famed St Bernard rescue dogs. But on this mid-summer day, there was little sign of the snow that must blanket the landscape in winter, even though the temperature was appropriately chilly.

Grand St Bernard Pass – taken from Switzerland, Italy at the opposite end of the lake

We passed down into Italy, admiring the alpine scenery and wishing we had packed a picnic as lunchtime approached and then passed, until we saw a roadside sandwich stall (complete with draught beer, a barbecue, and a tent for shade over tables and chairs), with a cheerful Italian man swigging on his beer and a long-suffering wife handling the finances. The man easily swung from Italian to French, and laughed at our surprise at the ample size of our four euro sandwiches.

Eventually though we left the mountains, where we had passed picturesque village after village, vines clinging to the hills, and castles in varying states of ruin, back down into the plains and the extravagantly fast Italian autostradas that whisked us home tout suite.

“We’re going to spend July in Rome,” we casually told friends and family before we left. We didn’t really think about what we might want to do, but that was okay, we had a whole month. That was plenty of time. We’d be able to get to know people in our neighbourhood, become locals at local restaurants, and feel at home. We could go off and explore new neighbourhoods, as well as touch base with all major must-see sights again. The possibilities seemed endless.

But so is Rome. No sooner had we got here, than we realised that the timer was running down. The truth is that Rome is bottomless. There are of course the major sights – the Vatican, the Colosseum and Forum, the Pantheon, and Trevi Fountain. There are dozens of museums (or so it seems), and more churches and cathedrals than you can imagine. Then there are the neighbourhoods – our own Primavalle, Trastevere, Testaccio, and others. The markets, the shops, the parks, the restaurants. We want to spend time in all of them.

So, there is a lot to do in Rome. But in Rome, we are also in the centre of Italy, and that makes it very easy to get to other places. Why not?  Just for a day?  We downloaded an App – 200 Day Trips from Rome. Mamma Mia!

So we’ve had to be very selective about how to spend our time, at the same time recognising that

a) the heat is exhausting and so we can only spend so much time outside before we will melt away and slither down a drain (or my toes will fall off – a story you do not want to hear),
b) we actually want to relax and enjoy ourselves, without feeling that ridiculous tourist pressure to see everything, and
c) we’ve still got a long time to go on this trip, and we need to pace ourselves.

So we’re learning to pick and choose, learning to cull certain sights, to make sure our tourist euro is well spent. But it doesn’t happen without a little regret.  And still, time is ticking on …

Within a week, we’ll be taking off on our Turning Lemons into Limoncello adventure. Right now though there are a million things that need to be attended to, so I will keep this brief.

See you on the road!