Hottest:   Aqaba, Jordan, where the temperature soared to 47 degrees.

Coldest:   Warsaw, Poland, where we woke to morning frosts.

Most annoying cultural habit:   Hogging the footpath (pavement) in Italy

Most pleasing custom:    The friendliness of Jordanians, and being welcomed as “locals” at restaurants in Italy.

Most disappointing place:    Rome in July. (Rome is fabulous, just not in July).

Worst meal:    Poland sausage encased in potato dough with a weak, watery white sauce and a few slices of mushroom.

Note:  Same rules as last post.  Click on the photos if you want to see a large picture.

Driving south to Petra, inland from the Dead Sea, we made a stop at one of the many Crusader castles in Jordan. The castle at Al Karak was, again, a  large site, which made it easy to imagine both the siege (Saladin kept the castle under siege for a year before conquering it in 1189, after a failed attempt several years earlier), and the lives of the Crusaders who lived there.  How must it have been to have come from green England, and find yourself in this hot, barren landscape?  What power religion – or societal pressure – to induce you to do this?  And with the benefit of almost a thousand years hindsight, to what purpose?  The castle was an important one, and controlled trade routes from Damascus to Egypt and Mecca.  Perched high on a hill, it is easy to see how it did this.

Then again, south from Petra along the King’s Highway, down to Aqaba on the Red Sea.  As we dropped from the desert plains down into the coastal town, the temperature outside rose from around 39 degs C to 46.  (And on the following day, it hit 47C.)  Our hotel was one of several large hotels right on the beach.  The attraction of the sea was obvious, and the husband reported that it was in fact cool and refreshing, although spending any time outside in the afternoon seemed like madness.  Yet we saw multiple Russians in bikinis braving the sun and heat, and perhaps more surprising, Muslim families near the pool or on the beach.  Dad and the kids in the water, Mum sitting in the shade, wearing multiple layers.  I guess it is a matter of acclimatising, but as my faced burned after being in this heat (and in the shade) for only a few minutes, I could only imagine how it felt to be so covered up.  That said, I am a huge fan of Muslim women’s swimsuits.  With a hood, long sleeves and long tunic, with under trousers down to the ankles, there is little to no chance of sunburn.  For someone like me, with an almost paranoic fear of sunburn and almost religious application of 30+ sunscreen, and knowing too that my husband recently lost a friend to melanoma, I would love to adopt these swimsuits as my own.  And we postulated, as we hid from the heat  in the air-conditioned bar with a welcome beer after the long drive, whether these swimsuits might become the norm, and that one day, as global warming increases, we will all naturally cover up.

The most amusing thing about Aqaba though, was the view outside our window.  To the left, we could see a huge flag, one that we assumed was the flag of Jordan (but minus a star – which means it was the flag of the Great Arab Revolt against the Ottomans in 1916, led by the great-great-grandfather of the current King of Jordan).  It has been there for almost a decade, and was once (reportedly) the tallest flagpole in the world.  To our right, we could see Israel.  On the edge of their coast, they had a huge painting of an Israeli flag.  It was painted on the side of a navy hangar earlier this year, the “brainchild” of the mayor.  It looked like a sad, tit-for-tat response to the large, and beautiful flag in Aqaba.

Our hiding place from 46 degs C – the bar, of course

At the top of the photo is Eilat, Israel. and at the bottom, Aqaba, Jordan.

The giant flag and flagpole in Jordan 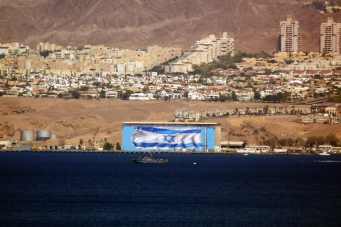 The reason for visiting Aqaba is not however the Red Sea, though it very well could have been if we had had enough time, as reportedly the diving and snorkelling are excellent.  And at least we could say on this trip that we dipped our toes into the Red Sea, the Dead Sea and the Med Sea. (Groan!)  No, the reason to visit Aqaba was about 60 kilometres back up the road.  As we drove down, we saw the most stunning landscape open up.  This was the famed Wadi Rum, where tourists take four-wheel drive tours through the desert and the rocky landscape, and sleep overnight in so-called Bedouin camps.  We weren’t that keen on the Bedouin camps, with bugs, dust, dodgy or no air-conditioning, shared toilets, and potentially dodgy food, even though the prospect of spending an evening under the stars in isolation was appealing.  So we stayed in Aqaba, and drove up the next day.  We turned off the main highway, and drove inland about 20 kilometres, stopping regularly for photos.  Every hundred yards or so the view changed, and a new photo opportunity emerged.  We had to become choosy.  We decided not to take a tour off-road (I wasn’t well), especially after seeing the map of where the main “sights” were (including the view from the visitors’ centre), but simply to drive the roads.   And in driving the back roads, we saw the real, un-manufactured lives of the local people as well as the landscape.  We also discovered that many of these so-called wilderness camps were only a few hundred metres off-road, next to a village, and in one case, three of the camps were lined up next to each other.  Not at all an authentic Bedouin experience, and one we were (by now) congratulating ourselves on missing, in between marvelling at the views.

Sadly, our photographs do not do justice to the environment, the changing light layers, the feeling of being in 40 deg heat, surrounded by desert and this scenery.  But I hope you enjoy the camel sightings as much as we did.

Camels in the desert

View from the visitors’ centre